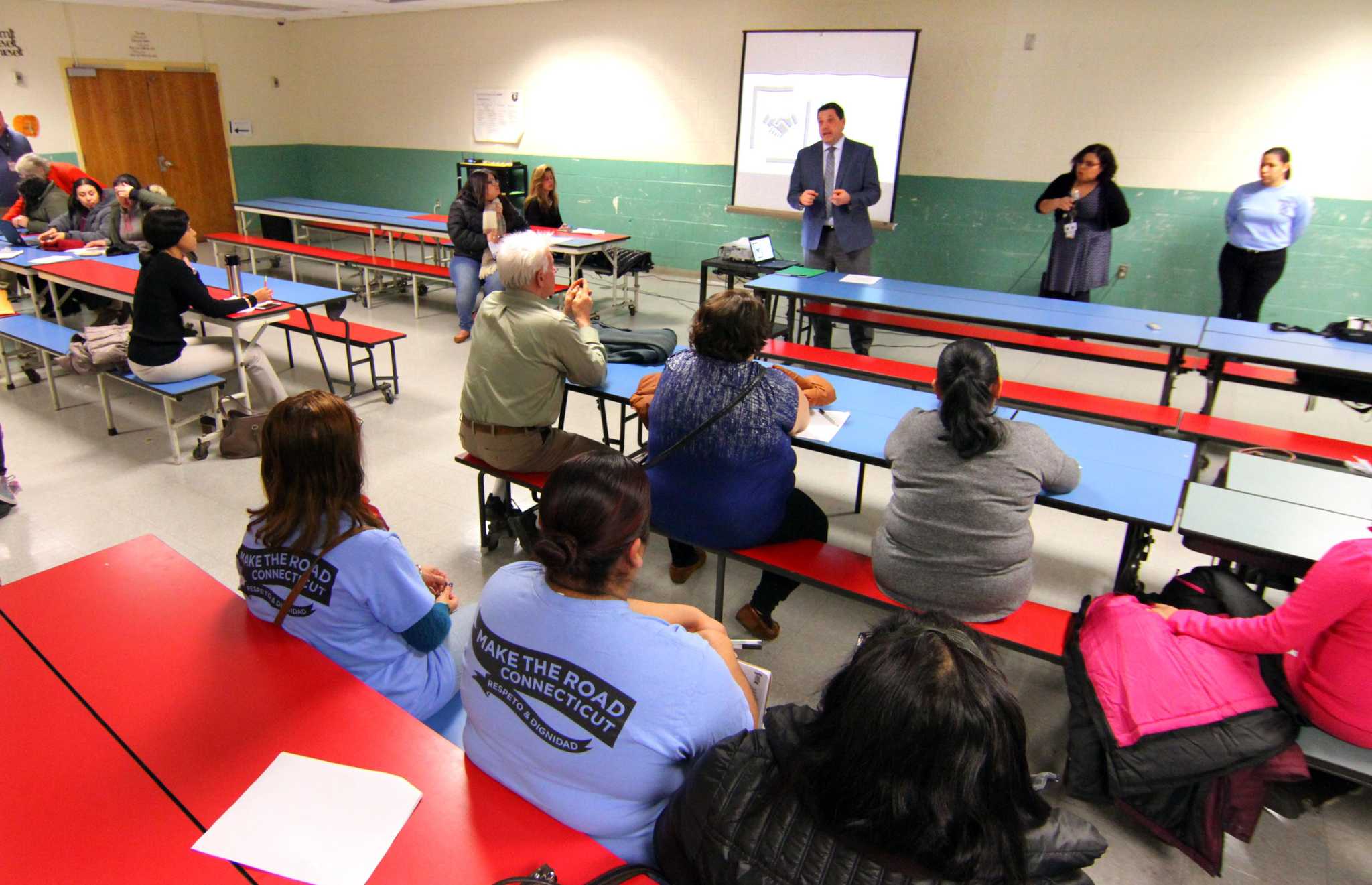 BRIDGEPORT — A school-based center for the parents of English learners has opened in Bridgeport.

The Newcomer Arrival Center will support new arrivals to the United States and non-English speaking families in the district’s schools, according to Make the Road Connecticut, an immigrants rights group.

The center celebrated its opening at Central High School on Tuesday evening.

The end-goal is to help the 3,916 students learning English, according to 2020-21 district data, thrive in Bridgeport schools.

“To do that, parents need to know how the system works, and be supported by the system,” said Wendy Cardenas, the group’s lead organizer.

The center will help parents with school registration, translation and interpretation services, transportation and connecting with healthcare providers and community programs, representatives from Make the Road said.

“Each parent will have a place to turn when they have questions or concerns about the bilingual and general programs that are taught in the schools,” said Minerva Antigua from Make the Road, in a statement. “Parents whose first language is not English will have a place where they will receive support.”

Superintendent Michael Testani suggested the center will be a substantial improvement from the jumbled and inefficient procedure that predated it, which involved administrators across schools and City Hall.

“This gives them a one-stop shop where they can go, get information, register their kids, get hooked up with physicals and placement testing,” said Testani. “This way when they arrive to the school, they just walk in and they’re ready to go.”

“This is something that’s been on my mind for years,” he said. “We shouldn’t be giving parents the run-around.”

Cardenas, the lead organizer, said the center is the result of the Mothers in Action Committee’s persistent advocacy: “About two years of pressure on the system, showing them data and giving them suggestions of what we can do.

Make the Road has been engaged in a campaign to improve public education for Bridgeport’s English language learners since 2019.

The organization surveyed parents and found that many were unaware of the services the district offered for their kids.

The advocacy group presented their findings to the district, and together they planned forums to get parents involved in their children’s education. But turnout was low, and later sessions were canceled.

They then put out a list of demands they said would help the district better serve its English-learner population, including more community involvement.

About a month ago, Cardenas said Make the Road heard from the district.

“They shared with us that they had worked on something that could benefit the parents,” she said, “and this was the creation of a new welcome center for new arrivals and EL parents.”

Cardenas said non-English speaking families who are entering the public school system can forego City Hall, and register their children and test their language skills at the center.

Testani said his directive to the bilingual education department is that those workshops be monthly.

He added the center has a large adjoining classroom, where the district can service students before they are integrated into their classes, and plenty of space for meetings.

Central High School, where the center is housed, is already home to the district’s adult education program. Testani pointed out that by co-locating the two, he hopes to connect non-English speaking parents to evening classes.

“For the kids to really practice when they go home, (their families) need to speak English,” he said.

“I think this is a way to do it. As I’m registering your daughter for class, your son, I can have the adult ed folks come down and offer you classes as well,” he said.

Cardenas, the organizer, added that part of the benefit of the center is staff will be on-hand to engage with families going forward.

Organizers from Make the Road said now her group will focus on connecting families with the center and following up with the district about the services offered.

Cardenas said the group is pushing for the creation of an advisory council of parents who speak different languages. Those individuals could introduce more families to the center, she said, and provide feedback to district officials.

“We’re holding them accountable,” she said, “and also making sure parents are involved within the center as well.”